How To Clear Snapchat Cache On iPhone (2023 Update)

Are you looking to clear Snapchat’s cache on your iPhone?

This isn’t only a great way to free up some additional space, but it can also fix bugs that pop up while using Snapchat.

While Android phones have a way to clear the cache of any app, it’s not quite as easy on iPhone.

How To Clear Snapchat’s Cache On iPhone

Currently, there are two primary ways to clear the Snapchat App’s cache on your iPhone.

Let’s look over each one of them now!

1. Clear The Cache Through Snapchat’s Settings 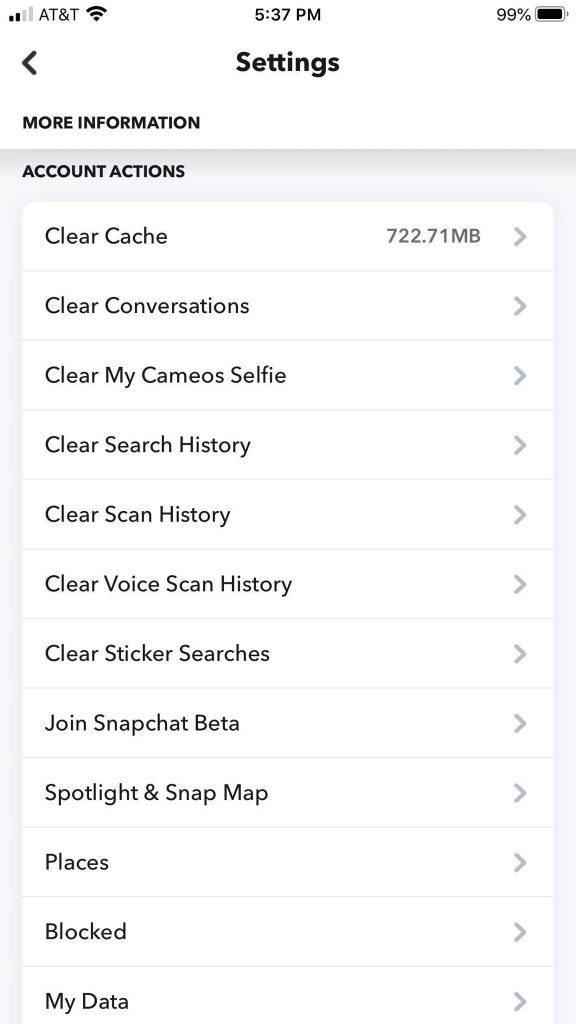 Snapchat has a function to clear the cache built directly into their app! In addition to iPhone, it’s also available both on iPads, Android phones, and Android tablets.

Once you know where to look for it, clearing the Snapchat cache this way only takes a few moments. This makes it the faster out of the two methods listed in this article.

The cache clearing options can be found within Snapchat’s settings.

To fully clear your cache on Snapchat, follow these steps:

A few moments later, the cache will finish clearing. Snapchat may need to restart at this point, but that’s completely normal.

Congratulations! Snapchat’s cache will be completely cleared after this process has been done, clearing up some space on your phone and potentially fixing bugs as well.

Note that Snapchat may also allow you to clear specific types of cache – for example, browser cache or memory cache.

By default, clearing all cache will delete the cache from every category. If you want to get more specific however, you may wish to only clear specific types of cache instead.

We’ll talk more about the specific types of cache a little later.

2. Clear The Cache By Deleting And Reinstalling Snapchat

The second way to delete Snapchat’s cache is to delete the app itself. Then, redownload it from the App Store.

In fact, many iPhone apps don’t have the option to clear cache within the app, with Snapchat being a rare exception. So, for most apps, the only way to clear the cache on iPhone is to delete and reinstall the app.

Deleting the app won’t just delete the cache however, it will also delete any other temporary files that may have been downloaded.

This means the potential is there to free up even more space by doing it this way, than by clearing the cache within Snapchat’s settings.

The downside is that it takes longer, and requires you to redownload the app.

This also means you will need to sign back in after downloading it again.

Still, this is an effective way to clear Snapchat’s cache if you’re using it on an iPhone or iPad!

What Is Snapchat Cache?

Cache can essentially be thought of as a collection of files that are downloaded in advance.

For example, if you are going to use or view the same files a bunch of times, Snapchat may download these files ahead of time, and store them on your device.

This way, you don’t have to redownload them each time you want to use them – they are already there. This helps the app load faster, while also conserving your mobile data.

Some examples may include thumbnails on memories, for example.

As mentioned earlier, Snapchat may allow you to clear specific types of cache, while ignoring others. Let’s look at each type in more detail:

Browser Cache: Cache, cookies and temporary files generated using Snapchat’s built-in web browser.
Games Cache: Cache generated when playing any of the games built-in to Snapchat. Cache may include downloaded graphics, images or UI elements utilized by the game.
Lens Cache: Downloaded lens files. Note that deleting this won’t prevent you from using the lenses again, they may just take longer to load the first time after the cache has been cleared.
Memories Cache: Thumbnails and other temporary files generated while viewing your Snapchat memories.
Search Cache: Cache generated by using Snapchat’s search functions (potentially including results from previous searches.)
Stickers Cache: Recent stickers used, and other temporary data in the sticker picker section. Note that deleting this won’t delete the stickers themselves.
Stories Cache: Thumbnails, previews, and other temporary files created after viewing or posting Stories.

Do You Need Any Special Software To Clear Snapchat’s Cache?

While researching other ways to clear Snapchat’s cache on iPhones, I found many people claiming it’s best to do it using special software.

This couldn’t be further from the truth.

While some articles have claimed that you can clear Snapchat’s cache using special iPhone software, these are nothing more than advertisements.

Although some pieces of software can be useful for backing up and clearing space on your phone, none of these can do anything special as it relates to Snapchat.

At least, not more than you could do yourself by following the steps above to clear the cache.

So, you shouldn’t feel like you need to purchase special software in order to free space up on your phone – it really isn’t necessary!

As you can see, clearing the cache on Snapchat is relatively easy.

While it’s quickest and easiest to do it directly through Snapchat’s settings, deleting and reinstalling the app also clears it completely – and also deletes all temporary files created by Snapchat.

Note that even if cache is cleared, a lot of it will be redownloaded as you use Snapchat. So, while it can clear up some space on your phone, it isn’t a permanent solution.

I hope that you’ve found this article to be helpful. If you have any other questions about clearing Snapchat’s cache, please ask them using the comment form below.