With over 7,500 Taco Bells in the United States alone, it’s undeniable – this is one of the most popular chains for Mexican fast food.

At the same time, use of Apple Pay (and other contactless, wireless payment options) are rapidly increasing in popularity among fast food shoppers.

You may find yourself wondering – is Taco Bell one of these places where it’s accepted? Does Taco Bell Take Apple Pay?

Per the official website, it does appear that Taco Bell accepts Apple Pay at all of their stores.

Per reports on the internet, it appears that Taco Bell began accepting Apple Pay and other contactless payment options as early as 2019. This is around the same time many other stores started accepting Apple Pay, such as TJ Maxx for example.

This is wonderful news, as Apple Pay is a quick, convenient, and hygienic way to make your purchases.

Does Taco Bell Take Apple Pay In The Drive-Thru?

Using this article as an excuse to go pick up a snack, I headed to my local Taco Bell and purchased some Fiesta Potatoes.

It turns out, the answer is yes – you can use Apple Pay to pay, even when ordering through the drive-thru. In fact, my Taco Bell has an Apple Pay sticker on the drive-through signaling it was accepted.

Next, you may be wondering – does Taco Bell accept Apple Pay for online orders? What about orders placed through their app?

I tried placing an order both online on their website, as well as using the official ‘Taco Bell – Order Fast Food’ iPhone app. 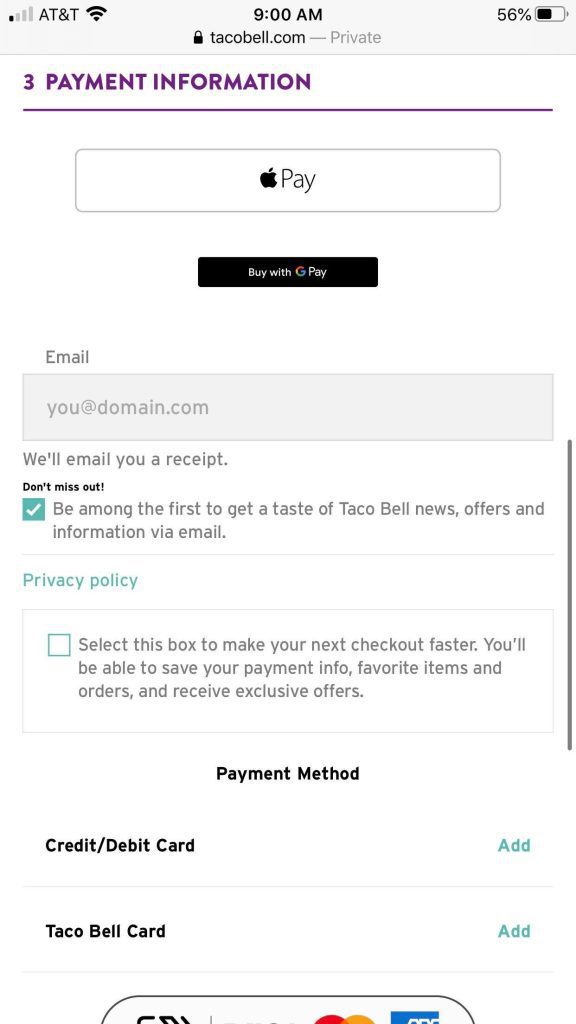 Interestingly enough, I had a different experience.

When ordering online through their mobile site, Apple Pay was accepted. This test was done using Safari on iPhone.

However, when I went to order through the Taco Bell app, Apple Pay was not presented as an option – only credit / debit cards and Taco Bell gift cards were.

Therefore, if you wish to order online using Apple Pay, you may wish to do so through their website on your internet browser, rather than through the app (though I must say, the app is very well designed despite a few bugs I encountered during testing.)

What Other Payment Methods Does Taco Bell Accept?

In addition to Apple Pay, Taco Bell also accepts a wide variety of other payment methods that you can use to purchase your meal. Some of these include:

Note that PayPal is not on this list. Some people have asked, “Can you pay for Taco Bell with PayPal?” Unfortunately, the answer seems to be no, even if ordering online or through the Taco Bell app, at least not directly. One way to get around this is if you use a digital wallet that accepts PayPal as a payment option. Samsung Pay and Google Pay are both examples.

Other Restaurants Similar To Taco Bell That Take Apple Pay

If you change your mind and no longer want Taco Bell, here are a few other similar places that also take Apple Pay:

Note that acceptance of Apple Pay can be checked using the ‘Maps’ app that comes preinstalled on all iPhones and iPads. Simply open up the ‘Maps’ app, find the restaurant or fast food joint of your choice, and click on it.

If you scroll down and see an Apple Pay logo or a message that says ‘Accepts Apple Pay’, you can be confident that Apple Pay is accepted at that particular location.

If paying for your Taco Bell meal using Apple Pay, you can earn up to 2% cash back if you use Apple Pay with the Apple Card.

While some merchants will give you up to 3% cash back, unfortunately Taco Bell isn’t on this list.

Additionally, Taco Bell does not offer any sort of credit card of their own to further boost cash back.

In order to maximize cash back, you may consider using a credit card that offers restaurants and dining as a bonus category – which may offer 3-5% cash back vs. the 2% you’d get using Apple Pay with the Apple Card.

However, if you do not have a credit card that offers more than 2% on restaurant purchases, the Apple Card is still a good option.

Does Taco Bell take Apple Pay? Fortunately, they do! All Taco Bells across the United States accept Apple Pay as a payment option, both at the register and in the drive-thru.

Additionally, Apple Pay is accepted for online orders and through the Taco Bell – Order Fast Food app, so you are welcome to use it regardless of where you choose to order.

Taco Bell is a registered trademark of its owner. We are not affiliated with or endorsed by Taco Bell in any way. We are not speaking in any official capacity, and cannot guarantee accuracy of this information as facts may change at any time. For the most up-to-date information, contact Taco Bell directly or visit their official website. The Taco Bell name is used only for nominative fair use.