Are you attempting to watch a movie or TV show on Amazon Prime Video, but received a message that said ‘insufficient bandwidth?’

It may go on to say, “Your bandwidth is too low. Playing content with low bandwidth will cause the video to pause while it rebuffers. Do you wish to continue watching this video?”

This can be frustrating to experience, especially if other streaming services work fine.

So, why does this happen, and what can be done to fix it?

What Does ‘Insufficient Bandwidth’ Mean On Amazon Prime Video? 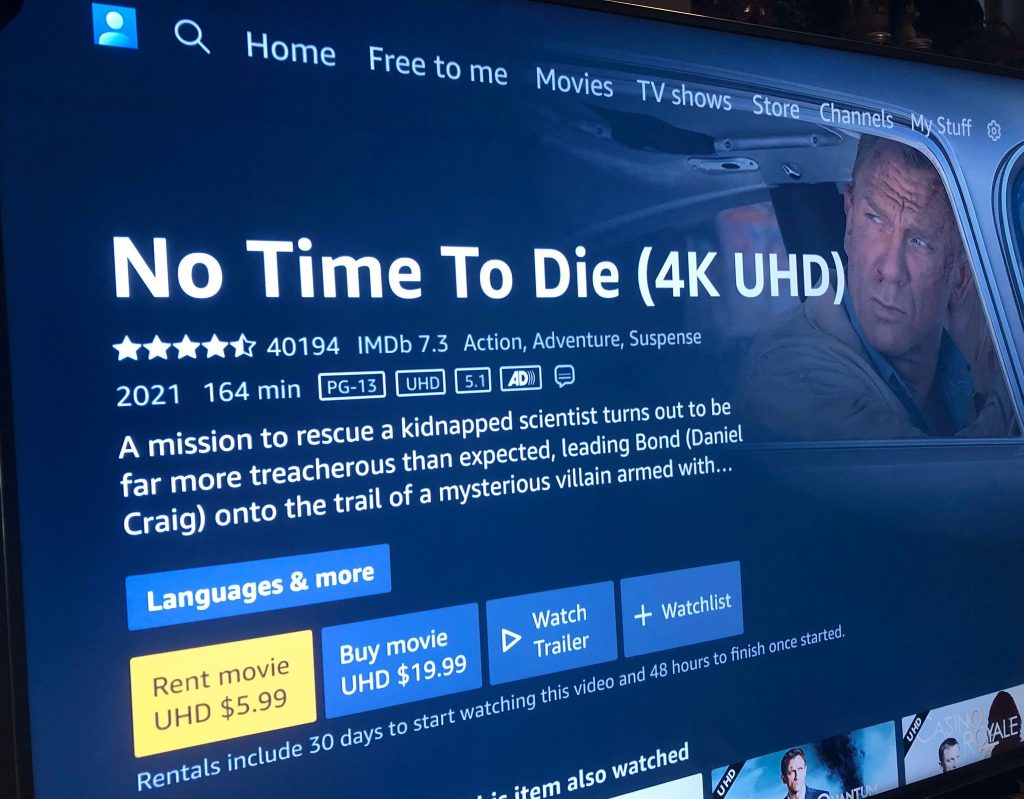 If you receive an ‘insufficient bandwidth’ message while trying to view content on Amazon Prime Video, this means that your current internet connection isn’t fast enough to watch the content without interruptions.

Streaming services like Amazon Prime Video require your internet to temporarily download content in order for you to view it, and video files use a lot of data.

Therefore, if you don’t have fast enough internet speed – or enough available bandwidth on your current connection, this can cause Amazon Prime Video to freeze, skip, or pause to buffer.

Note that even if you’re paying for a certain amount of speed, your available bandwidth is split among all devices currently using it within your household.

For example, if someone else is streaming in another room, a huge chunk of your bandwidth is already being used – which can cause problems, even with a fast package.

Anyhow, let’s look over how to fix the ‘insufficient bandwith’ error, so you can get back to enjoying Amazon Prime Video straight away!

How To Fix ‘Insufficient Bandwidth’ On Amazon Prime

Because the ‘insufficient bandwidth’ error tells us exactly what the problem is, we know exactly what must be done to fix it.

So, try out as many of these as possible to help Amazon Prime Video playback video smoothly!

1. Avoid Wasting Bandwidth On Other Devices

This one was mentioned earlier, but it is one of the most common culprits – especially if Amazon Prime Video was working in the past.

If another device in your home is using bandwidth, this can cut down on the bandwidth available for Amazon Prime Video to use.

Therefore, you should avoid doing things on other devices that use a lot of bandwidth, when you need it to be available for your TV.

Some examples of high-bandwidth activities include downloading content from the internet, streaming (especially in 4K), and video conferencing.

You may consider running heavy downloads overnight, when the internet would not normally be used to help with this.

Note: Sometimes heavy bandwidth usage isn’t always apparent – for examples, computers and other devices may download updates in the background, without you realizing it. This can temporarily tie up your bandwidth until the download completes!

2. Stream At A Lower Quality

You may consider streaming your content at a lower quality, as one sacrifice that can prevent insufficient bandwidth issues.

The higher resolution you stream the content at, the more data that will need to be downloaded. This requires a faster internet connection, and a higher amount of bandwidth to maintain without buffering.

Therefore, your internet may be able to stream comfortably in 1080p, whereas 4K video may simply require too much bandwidth.

Note that Amazon may jump the streaming quality around, to work with the bandwidth it has available (which is why videos can sometimes get a bit blurry, before jumping back up in quality again.)

By specifically choosing a lower-quality stream however, you may be able to avoid the ‘insufficient bandwidth’ message entirely.

3. Disable Your VPN (If Using One)

If you’re using a VPN (either at the device, or router level), consider disabling it temporarily.

Although VPNs are great at protecting your privacy, they will make a noticeable difference in your downloading speed.

This is due to the way they work.

VPNs act as sort of a ‘middleman’ between you and Amazon. When you go to stream the content, it must first arrive at your VPN’s servers, then get forwarded to you.

There’s no two ways about it – your download speeds are going to be slower if you are using a VPN while watching Amazon Prime Video, meaning you may not have enough bandwidth to view the content without pauses or interruptions.

For the smoothest playback experience, consider disabling it temporarily.

Restarting your modem and router should be considered a go-to solution for any sort of internet issues.

There’s a saying in the tech world that simply turning something off and back on again fixes it the majority of the time, and this may be the case for bandwidth issues as well.

For whatever reason, your internet can end up stuck slower than it should be, and a reset is often enough to solve the problem.

Keep in mind however that any downloads running in the background may fail if your internet disconnects, and will have to be started over from the beginning.

So, if you have computers or game systems currently downloading, you may wish to restart your modem and router after they’re done.

5. Check For Outages On Downdetector 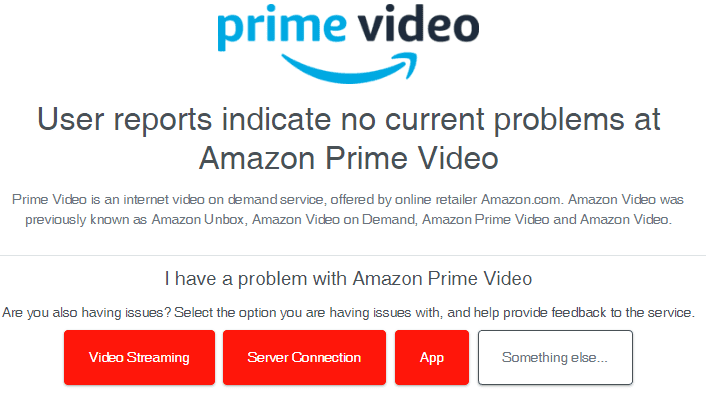 If this is the first time that Amazon is telling you that you have insufficient bandwidth, it may not be your fault at all!

It’s possible that there’s currently an issue on Amazon’s end, that is causing this message to appear for a large number of people.

Thankfully, you can check whether or not this is the case using Downdetector.

If other people are experiencing issues, you will see this reflected on Downdetector’s website.

Their pages also have a comments section, that allows people to type out the exact error that they’re experiencing (such as Amazon Error CS11, Amazon Error 9912, or of course, the Insufficient Bandwidth error.)

So, if lots of people are suddenly stating that they are receiving the insufficient bandwidth message, chances are it isn’t you – it’s an issue with Amazon, and they’ll likely fix it soon.

Finally, you may consider upgrading your internet package if you are constantly experiencing bandwidth issues.

As technology has advanced and our households use more and more data, the need for faster internet has become more common.

Internet service providers like to claim that their packages are suitable for 4K streaming for example, but on cheaper packages, this may only be true if one device is using the internet at a time.

If you have multiple people in your household or multiple devices are connected to your internet, it’s possible that your current speeds simply aren’t enough to keep up.

Therefore, it may be worth upgrading to a larger package, in order to prevent any further issues.

Why Does This Only Happen On Amazon, And Not Other Streaming Services?

If you are only having bandwidth issues with Amazon (and not other streaming services), it can be very frustrating!

This is especially true if other services like Netflix, Hulu or Disney+ work absolutely fine, with no freezing or buffering whatsoever.

So, what gives? Why does this happen?

It’s possible that Amazon uses a different level of compression than other services do, meaning that file sizes are larger. While this may lead to better picture or audio quality, it also requires your device to download larger amounts of data for things to run smoothly.

It’s also possible that your Amazon Prime Video app on your smart TV, phone or tablet is experiencing a software bug, that is preventing it from working as good as it should be.

Some people have seen similar issues get fixed when purchasing a dedicated streaming device (such as a Roku, Apple TV or Amazon Fire TV Stick) rather than using the Amazon Prime Video app that came with their televisions.

This is because apps made for dedicated streaming devices receive a lot more support, since there are more people using them.

To learn more about why dedicated streaming devices are still worth purchasing (even if you have a smart TV), click here!

Note: Many streaming services (like Netflix) actually use Amazon-owned servers to handle much of their operations – so it’s not the servers themselves that make the difference, contrary to popular belief!

If a message pops up saying ‘insufficient bandwidth’ while trying to watch a movie or TV show on Amazon Prime Video, this means that your internet connection isn’t fast enough to play it without buffering.

Therefore, you’re likely to experience slowdowns, freezes, and pauses while you watch content, unless you try out one of the fixes mentioned above.

I hope that you’ve found this article helpful, and that these fixes will prevent the message from showing up again in the future.

If you still have problems or there’s anything I can help with, let me know below and I’ll get back to you as soon as I can.