How To Unfollow Everyone On TikTok Fast (2023 Update)

Are you looking to complete clear out your following list on TikTok?

If you’re following a lot of people, it’s sometimes easiest to just unfollow everyone at once, then refollow the accounts you care about the most.

But how do you unfollow everyone at once, and what is the fastest way to unfollow people on TikTok? Additionally, will people know that you unfollowed them?

1. Unfollow One At A Time 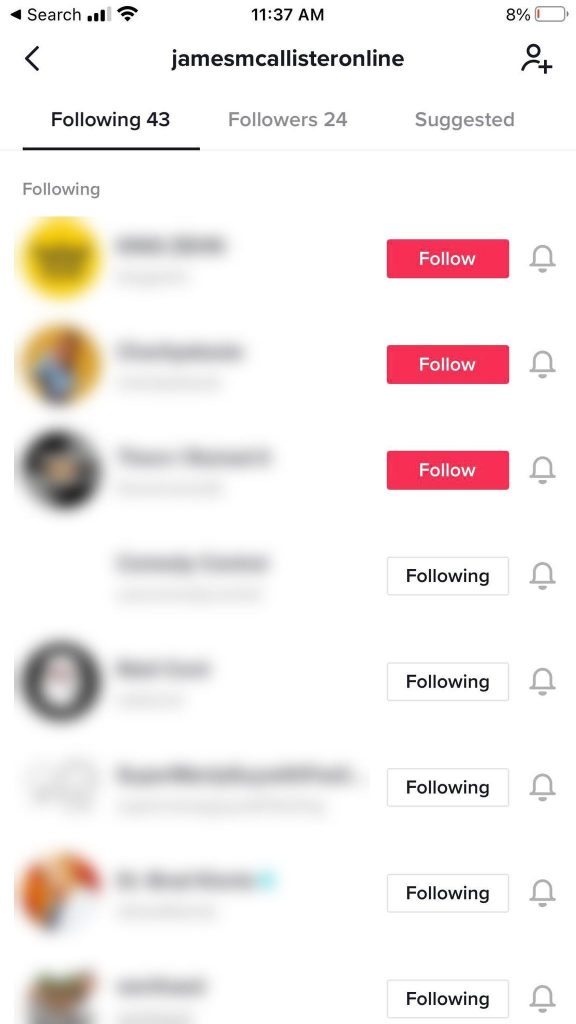 Unfortunately, there is no button to unfollow everyone immediately. And while we’re go over a way to automate the unfollowing process later, it’s also possible to unfollow people one at a time, very quickly.

Visit your profile, and pull up your following list.

On the right-hand side, there will be a button that says ‘Following.’ Tap on it to immediately unfollow them without having to visit their profile.

As you can see, you can very quickly unfollow people in bulk this way – it takes less than a second to unfollow each account.

Considering that most people only follow less than 2000 users, this means that you can unfollow everyone in under a half hour if you’re fast.

That being said, there is an important warning – if you try to unfollow too many people too quickly, TikTok may shadowban you.

We’ll go over TikTok’s exact unfollowing limits later in this article. First, let’s look over some other methods to unfollow everyone on TikTok at once.

If you have a large number of people that you need to unfollow and you don’t want to take the time to unfollow them on, another option is to make a new account.

TikTok lets you remain signed into 3 TikTok accounts on each device, meaning you can quickly switch between them when you want to.

So, this is an option that’s seriously worth considering, especially if you aren’t a TikTok creator yourself and don’t have a large following that you’d be losing.

If you’re going to do this, you can always visit your original profile to refollow the accounts that mattered to you the most.

Still, if you’re following thousands of accounts on your old profile, sometimes it’s easier to just start with a clean slate, and make a new TikTok account.

3. Use A Macro To Unfollow Automatically

Did you know that there are macros available, that let you record an action, and then have your phone do it automatically?

For example, you could create a macro that unlikes all of the accounts on the screen, scrolls down, and then continues unliking the new ones.

So, once you set it up, you don’t have to do anything else – you can simply let it run until it’s unfollowed everyone!

Note that macro apps are only available for Android, however if you have a computer you can also install an Android emulator like Bluestacks or Nox and emulate Android on there.

For Android, a few of the most popular macro apps include:

Again, these can also be used on PC with an Android emulator such as Nox or Bluestacks.

Simply install the emulator, the TikTok app, and one of the applications listed above.

When you log into TikTok on the Android emulator, keep in mind that your drafts won’t be available – however, that doesn’t mean that they were deleted! TikTok stores drafts on the device itself, rather than on TikTok’s servers.

This is actually why the TikTok app can take up so much space on your phone!

Anyhow, use one of these apps to record yourself unfollowing the accounts. Then, let it run until it continues unfollowing everyone automatically.

If you’re planning to unfollow everyone on TikTok at once, you may be worried about potential backlash.

But will people be notified when you unfollow them on TikTok?

Thankfully, the answer is no. This means that you can unfollow as many people as you’d like without worrying about them finding out, or sending you any hurtful messages back.

That being said, their follower count will decrease by one when you go to unfollow them. Some people will take notice of this and look to see who it was that unfollowed.

This is most likely if you unfollow someone that doesn’t have a lot of followers themselves, so even one person unfollowing can be noticed.

As far as notifications go however, you have nothing to worry about. Notifications will not be sent out when you unfollow accounts.

If you do refollow them however, they will receive a notification stating so.

Does TikTok Have Any Unfollow Limits?

But does TikTok have any sort of unfollow limits?

It turns out, they do. Just like with their following limits, TikTok users should try to unfollow less than 200 visitors per day – especially if they have a lot of people they plan to unfollow.

If you exceed these limits or unfollow people too quickly, you may get a message telling you to slow down, and your unfollow may not go through.

Additionally, it’s possible you may be shadowbanned if you are following and unfollowing a bunch of accounts too quickly. This can lead to the next video you’re posting getting 0 or low views, as it will essentially be suppressed and show up less frequently in other people’s feeds.

Ultimately, this is to prevent spam issues. Many bot accounts follow lots of users quickly, then unfollow them to avoid hitting TikTok’s total following limit.

Their goal is to grow their own following themselves, which is why you may occasionally have random accounts follow you on TikTok – even if you don’t post!

Unfortunately, there is no way to follow everyone on TikTok with just a single button press.

However, you can unfollow people pretty quickly if you are focused, or use macro software to automate the process.

I hope that you’ve found this article to be helpful. If you have any other questions about unfollowing people on TikTok, please ask them using the comment form below.