Does Facebook Suggest Friends Who Look At Your Profile? – Answered!

Have you ever visited someone’s profile only to see them show up on your suggested friends list hours or days later?

Or even weirder, have people who you seem to have no connection with at all – perhaps even no mutual friends, show up as well?

What powers Facebook’s friend suggestion algorithm, and are you at risk of someone finding out if you’re ‘Facebook stalking’ them?

These are all great questions. Let’s address whether Facebook suggests friends that look at your profile, which may provide some insight as to who’s been visiting yours!

Does Facebook Suggest Friends Who Look At Your Profile? 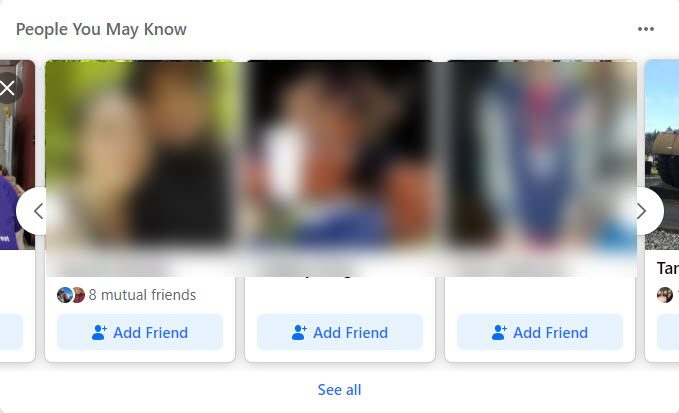 If someone has viewed your profile, are they more likely to show up as a suggested friend?

Reports on this have been conflicting. While Facebook officially refuses to admit that this is factored in, anecdotal evidence shows that it certainly seems to be likely. In fact, these coincidences are too strange and too common not to believe that Facebook takes profile viewers into account when choosing who to suggest as friends.

I’ve first heard reports of this when it comes to online dating – particularly with the app Tinder.

Tinder often matches people who are complete strangers, with no mutual friends in common. For all intents and purposes, these two people previously had no connection with each other, even through extended friends. It can also be assumed that they have never interacted with each other on Facebook, Instagram, or any other platform that Facebook’s parent company (Meta) owns.

However, Tinder users have found that shortly after engaging in conversations on Tinder’s platform, the people that they were talking to occasionally show up as suggested friends on Facebook.

Coincidence? I think not! How could someone that you have no mutual friends with, who you’ve never interacted with before on Facebook at all, show up as a friend suggestion? How would Facebook know that you know this person at all? Therefore, it seems like they must take this factor into account, even if they don’t cite it as one of the factors that goes into who is recommended to you.

So yes – it does seem that at least part of your recommended friends to add are made up of your Facebook stalkers. 🙂

Take a look at some of these alarming Tweets shared by Twitter users.

How does Facebook friend suggestions work? I have suggestions with no mutual friends, groups, education, or places or phone contacts? #mystery #facebook

Anyone else getting absolutely random friend suggestions on Facebook with no connections or mutuals ever since it went down lol?

This one isn’t quite the same, but it illustrates a similar point.

I have on several occasions, been recommended friends to add based on who I’ve been around – even if I have no mutual friends with them, or I’ve never interacted with them on Facebook or Instagram.

For example, a contractor visited my company offices and spent 6 hours there. Days later he was a recommended friend on Facebook.

I have also attended several parties in which I spent a lengthy period of time talking with other attendees. Again, they showed up as recommended friends days later.

Some of these people I am absolutely certain have never been recommended to me before, until I was within their proximity in person. Note that we didn’t share a Wi-Fi network – we were both on our own cellular data plans, so it seems Facebook collected this information via GPS.

Again, I can’t prove that Facebook takes this factor into account, but its too coincidental not to believe – particularly given Facebook’s incentives.

How Facebook’s Benefiting From This

It’s to captivate your attention, collect as much data on you as they possibly can, and then sell advertisements using that data.

They do this by encouraging as many interactions as they can (to gauge what you feel about everything they show you), and to keep you on the platform as long as possible (to collect more data and to show you more ads.)

Therefore, Facebook wants to encourage you to have as many meaningful friendships on the platform as possible.

A study from the NET Institute has shown that content output among users grows as their network grows in size.

In the context of Facebook, this makes sense when you think about it from a users perspective. We use Facebook to catch up with others, yes. But we also post status updates or share content for a number of other reasons – validation, connection with others, support of our own belief systems, to improve our perceived social status, and so on.

All of this benefits from having a larger ‘audience’ of peers, which can deliver these things we desire in higher quantities. It’s no wonder that everyone is so focused on their follower counts these days!

In a nutshell, our psychology binds us to the platform more when we have more friends. This leads to increased content production, more interaction, and more time spent consuming our friends’ content.

All of this is in line with Facebook’s goals.

Per the NET Institute study referenced earlier, the following has been concluded:

“We show that policies aimed at enhancing social ties can indirectly help facilitate content generation on the site, thereby creating a link between social tie-formation and advertising revenue.”

Therefore, it has been proven Facebook makes more money, when Facebook users have more friends. They will likely use anything they legally can to further this goal – including suggesting friends who have visited your profile.

Obviously, all the details of Facebook’s friend suggestion algorithm are not public, and I’m sure it’s far more complex than I could ever cover in a single article.

However, here is what they claim are the factors that fuel the ‘People You May Know’ suggestions:

Obviously, it is unlike Facebook to let perfectly good data go to waste, particularly with how important growing your friends list is to them.

So, there are certainly other factors that go into it that Facebook has chosen not to share.

Is Facebook suggesting you friends that have viewed your profile? Will you show up on other users’ friend suggestions if you ‘Facebook stalk’ them?

It’s a real possibility, and reports around the internet have all but confirmed this to be true.

We’d love to hear what you have to share!