Does Amazon’s Fire Stick Need To Be Plugged Into The Wall? – Answered!

Whether you’re the owner of an Amazon Fire TV Stick or you’re thinking about buying one, there can be some confusion on how it needs to be plugged in.

You may be wondering whether or not it can simply be plugged straight into your TV, or whether it needs to be plugged into a wall outlet as well.

So, does the Firestick need to be plugged into the wall, or can it simply be powered through the HDMI or USB port on your TV?

Does The Firestick Need To Be Plugged Into The Wall? 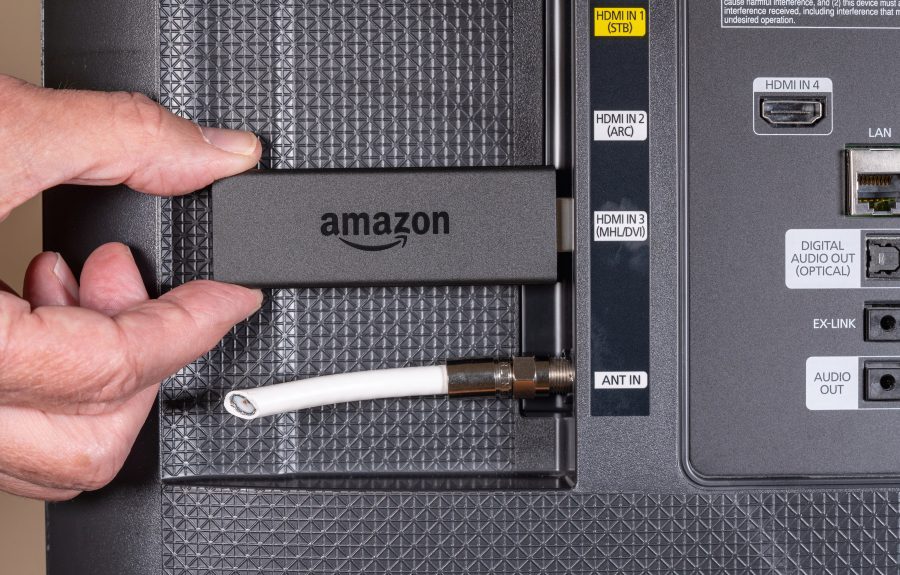 Yes. In order for the Fire TV Stick to run properly, it needs to be plugged into the wall using the bundled AC adapter.

This is because your TV likely does not supply enough power to run the Fire TV Stick on its own.

The Fire Stick requires 5v @1000 mA to function, and HDMI ports are only capable of delivering 55 mA of power. While this is enough to communicate with the Fire Stick, it’s not enough to supply all of the power that it needs to function.

This is true for all of the current Fire Stick devices, including:

* The Fire TV Stick 4K and 4K Max can be powered by USB via some TVs, but not all of them. Using the bundled AC adapter is still a good idea.

Can The Firestick Be Plugged Into My TV’s USB Port?

Unfortunately, most televisions do not supply enough power for the Fire Stick to be powered off of USB.

Most USB ports on modern televisions supply 500 mA of power. However, the Fire Stick requires 1000 mA of power in order to run properly.

While some people can get the Fire Stick to run off of USB, it can cause issues while it’s being used. Some of these issues include:

Some people have noted that they’ve been able to run the Fire Stick, including the 4K and 4K Max off of USB successfully. However, it largely comes down to the USB ports offered on your television.

So, you’re much more likely to have success when plugging the Fire Stick into a USB 3 port, rather than a USB 2 port.

However, because even USB 3 does not supply the full 1000 mA of power needed to run the Fire Stick in a stable manner, we recommend that you always use the bundled AC adapter, and plug the Fire Stick into the wall.

This is because if the Fire Stick happens to lose power during an update, it can brick the device – usually resulting it in never booting up past the logo splash screen.

So, you may be stuck having to perform a factory reset on it, or even replace the Fire Stick entirely.

Does The Firestick Need To Be Charged?

One advantage of using an outlet to power the device rather than a battery is that it is supplied a constant flow of power, and can be used for its entire lifetime without needing to be unplugged.

If your Fire Stick is experiencing issues that make it appear like it’s dying (such as shutting off, losing connection or resetting), this usually points to a different issue.

However, the Fire Stick never needs to be charged, or powered down in order to remain usable. As long as it’s plugged into the wall and everything is properly connected, you should be able to use it continuously for as long as you’d like.

Should I Unplug The Firestick When It’s Not In Use?

No. It is not unnecessary to unplug the Firestick when it’s not being used. It will not cause any damage to your television, even if it is left continuously plugged in.

However, we recommend plugging in both your television and the Firestick’s AC power adapter into a surge protector if you live in an area that’s prone to power surges.

Unplugging and plugging the Firestick back in can be a bit of an inconvenience, especially if you are primarily using the Firestick’s functionality to watch content on your television. Therefore, it really isn’t necessary, and you can safely leave it plugged in without having to worry.

Of course, if you are running out of HDMI ports on your television, we recommend buying an external HDMI switch to give you more ports to work with.

Unfortunately, Firesticks usually need to be plugged into the wall for power, in addition to being plugged into your television.

The power provided by a TV’s built-in USB ports aren’t enough, and may cause the Firestick not to work properly if used. Therefore, plugging it into an outlet is a good idea to ensure you can use your Firestick without disruptions, or damage to your TV.

I hope that you’ve found this article helpful. If you have any other questions about Firestick, please ask them using the comment form below.