Where Is Gravy In The Grocery Store? (It’s In These Aisles)

Are you looking for gravy for your upcoming dish?

For some strange reason, grocery stores seem to make this a little bit challenging to find.

In this article, we’ll go over where you should look, which brands are best, which flavors are offered with each store, as well as some other interesting and useful information gravy!

What Grocery Store Aisle Is Gravy In?

Gravy is often found in the same aisle as the soups and broths, and is usually stocked on the bottom shelf.

In fact, this is part of what makes gravy so challenging to locate – you may have walked right past it! For whatever reason, it’s not often kept at eye-level, so it’s easy to miss.

If you don’t find it in the soup and broth aisle, try looking in the spice aisle instead.

Because gravy compliments so many other dishes nicely, it’s sometimes located with the spices and other flavor-enhancers.

Note that availability can vary by location however, and your specific location may not have all of the brands listed below.

What Are The Best Gravy Brands?

Among both parents making food for their families and even chefs working in restaurants, most people agree that making gravy from scratch will ultimately taste best.

That being said, not all of us have the knowledge or the time to do that. So, which brands should you turn to first when picking one out?

McCormick and Heinz are the two most popular choices when it comes to store-bought gravy.

People not only cite the savoriness and richness of the flavor, but also how easy it is to prepare.

You really can’t go wrong with either of these two choices!

Of course, gravy is a highly personal choice, both in types as well as brands. There are certainly other excellent brands that you may enjoy even more.

So, we recommend trying out several different options to find which you like best!

Where Is Gravy In Walmart?

Did you know that Walmart has an easy way to find out where each is within the store, without even needing to speak to an associate?

All you have to do is download the Walmart app onto your phone. 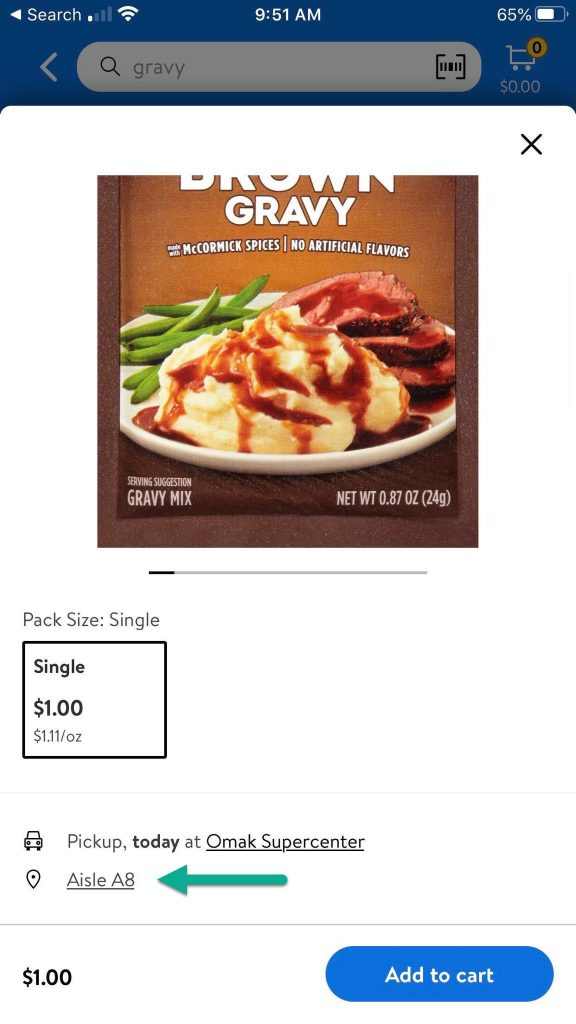 Once you install the app, it will ask you to enter your zip code and select your local Walmart location.

From there, all you have to do is search for ‘gravy’ in the search bar, and tap on the one you want.

On the product page, scroll down below the photo until you see the text pictured above. You should see an aisle number listed – in this case, mine is aisle A8.

Note that the exact aisle may be different at your local Walmart!

Can You Buy Gravy That’s Already Made?

Pre-made gravy can typically found in jars rather than in packets, and all you have to do is heat it up before adding it to your dish.

What Actually Is Gravy?

Gravy is a sauce made from the juices that run off meat during cooking. These juices are full of fat and protein, which makes them perfect for thickening and flavoring. To make gravy, you first need to make a roux, which is a mixture of flour and fat. Once the roux is made, you slowly add in the meat juices, whisking constantly until the gravy is smooth and thick.

Gravy is an essential part of many classic dishes, like roast beef, mashed potatoes, and biscuits and gravy. It can also be used to add flavor and moisture to dryer dishes, like stuffing or rice. And of course, gravy is the perfect way to turn a simple meal into a luxurious feast.

So next time you’re cooking up a big batch of meat and want to make some homemade gravy, make sure to save those juices. With a little time and effort, you can turn them into a delicious gravy that will take your meal to the next level.

Most of the time, gravy can be found alongside soups and broths sold in the grocery store.

However, it may be located in the spices aisle instead. Be sure to look towards the bottom shelf, as it’s sometimes not shelved in your line-of-sight.

I hope that you’ve found this article helpful. If you have any other questions about gravy, please ask them using the comment form below.